Strong Bitcoin support at $6,500 resulted in a 13% gain today, pushing BTC back over $7K as key metrics point to a possible bullish reversal.

As has been witnessed recently, Bitcoin has continued to dictate the valuation across the cryptocurrency market as a whole. Notably, Ether (ETH) briefly traded around $130, but has since recovered and is now attempting to retake $150, up around 6% for the day.

Bitcoin dominance continues to attempt retaking 70% and looks likely to do so in the near future.

With volatility returning to the BTC market, we will take a look to see if this is a relief rally or if there are signs that this is more of a pivotal moment for the number one crypto asset.

Price has ultimately found support at a previous highly traded volume node on the Volume Profile Visual Range, or VPVR, just below 65% of the retracement from the 2019 highs of 14K.

The bounce has also come from around the same price point that saw a very strong reaction back in May 2019.

The Moving Average Convergence Divergence indicator, or MACD, still implies that there is bearish momentum. Selling volume was above average last week and the price is trading below the 100-week moving average. So looking at the higher time frames, one would be forgiven for concluding that the outlook remains reasonably bearish. 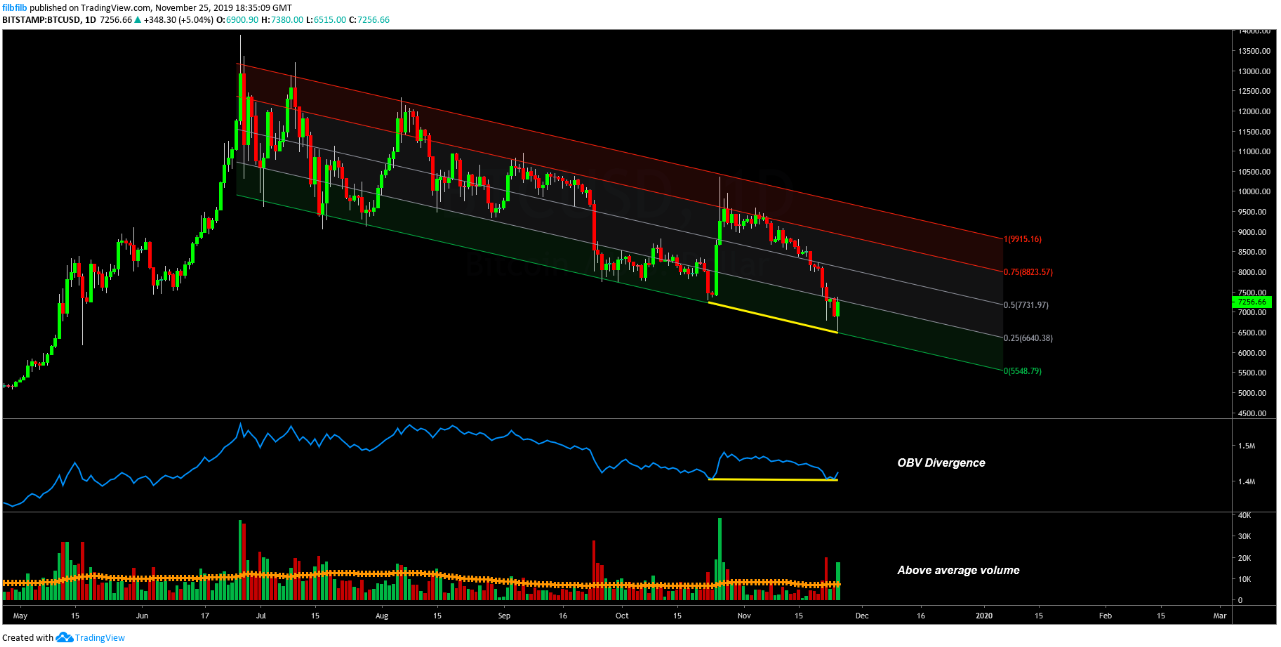 The daily chart is a little more useful in identifying the trend in the price of Bitcoin. It is evident that Bitcoin has bounced off the same $6,500 level as occurred in May. But additionally, Bitcoin has apparently found support on the diagonal channel in which it has been trading for almost 5 months.

This support appears to be backed up by a bullish divergence on the daily chart. This is identified by the On Balance Volume (OBV) indicator printing a higher low, whereas price has printed a lower low. This is suggesting that the selloff is being powered by diminishing selling and that there is hidden accumulation. 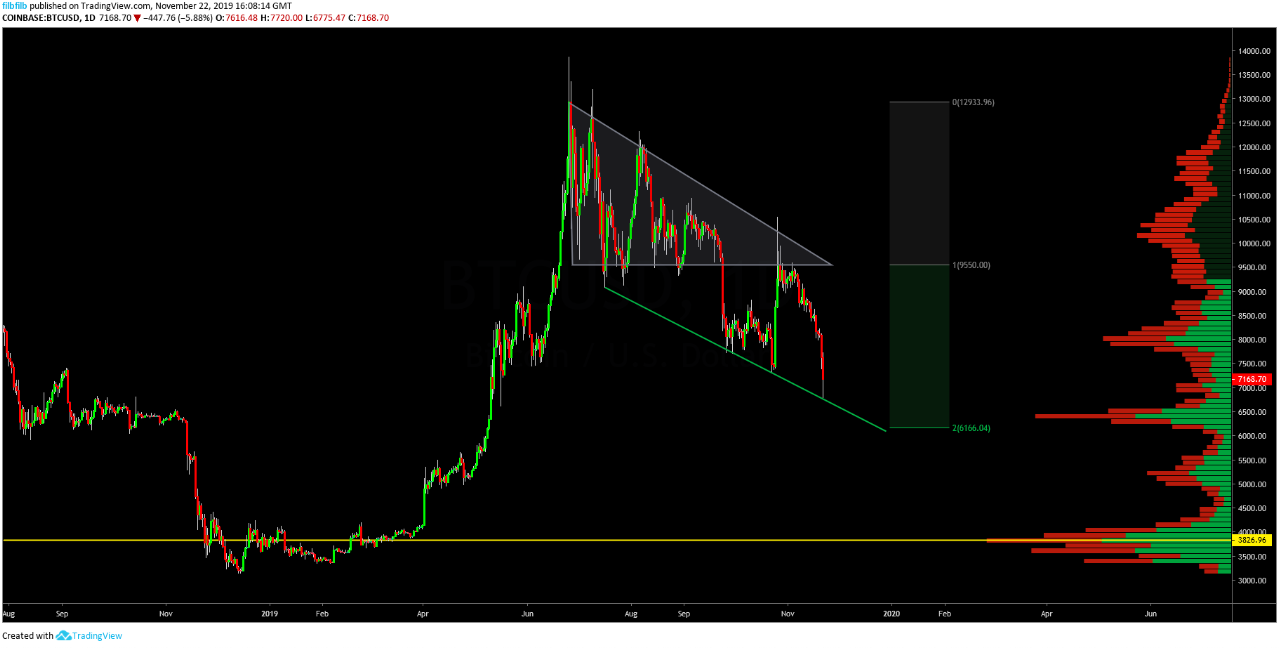 The support found at $6,500 is encouraging for the bulls. But there remains a bearish case that the technical target of the descending triangle is yet to complete. So there is a possibility that Bitcoin will need to do more business in the $6K price region.

The most bearish immediate outlook at the moment would be $6K failing to act as support and a fast fall to retest the 200-week moving average, currently around $5,400 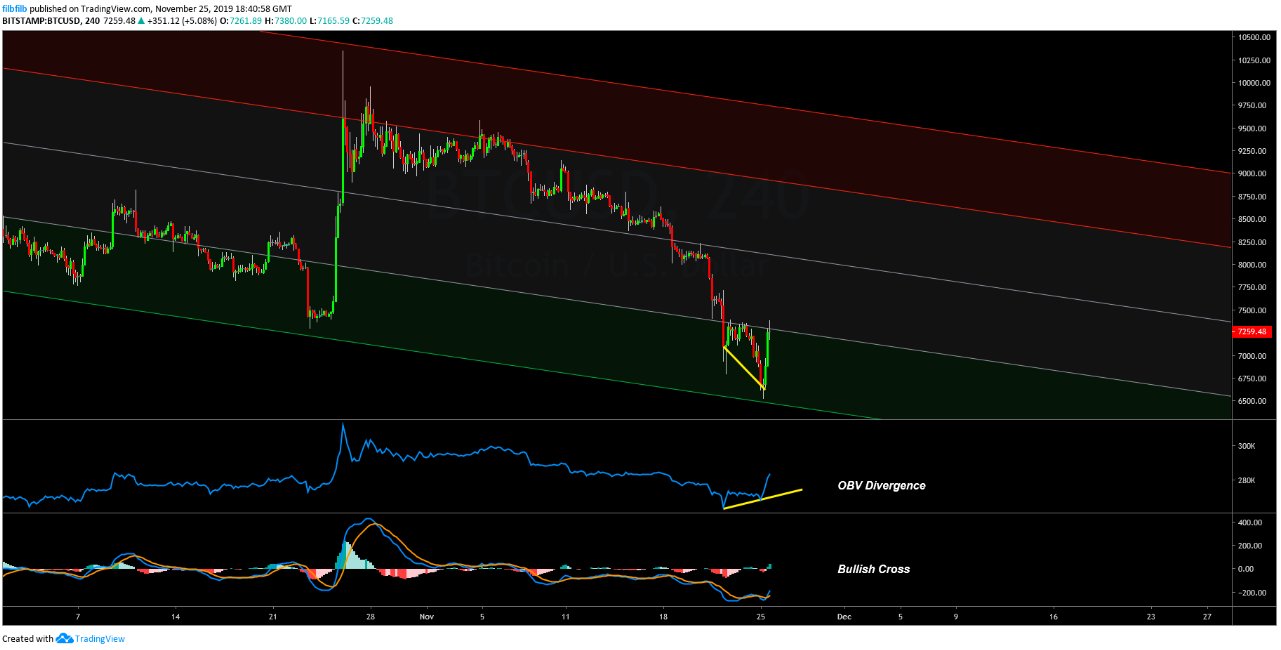 Looking at the 4-hour bitcoin chart as an immediate guide for how the rest of the week may play out, it’s clear that Bitcoin has run into some resistance at $7,400, in the vicinity of the 100 WMA.

Breaking and closing the week above this level is the main task for the bulls this week.

There is also a clear OBV confirmed divergence on the 4-hour chart, a possible strong sign of a least some attempt by the bulls to continue the price appreciation; this would also be supported by a bullish divergence and cross on the 4-hour MACD. 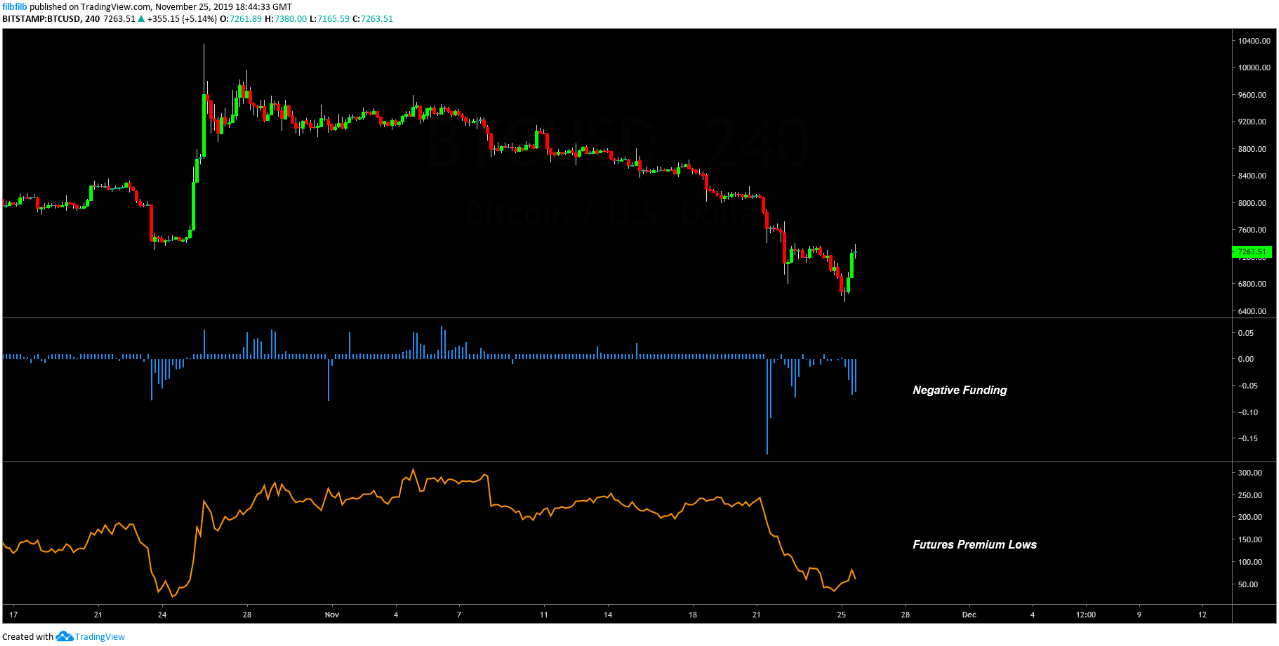 A look at sentiment in the market shows that Bitcoin funding is negative in the perpetual swap markets. Sustained periods of negative funding has previously had an inverse relationship with the direction of the price and, thus, supports the bullish case.

The same sentiment extends to the futures market where it is clear that the speculation over the strength of Bitcoin’s futures premium dropped to lows witnessed during previous corrections and bottoms.

Additionally, the fear and greed index has dropped to new lows with the market being in extreme fear suggesting that some of the weaker market participants are giving up hope — a good sign for the contrarian traders. 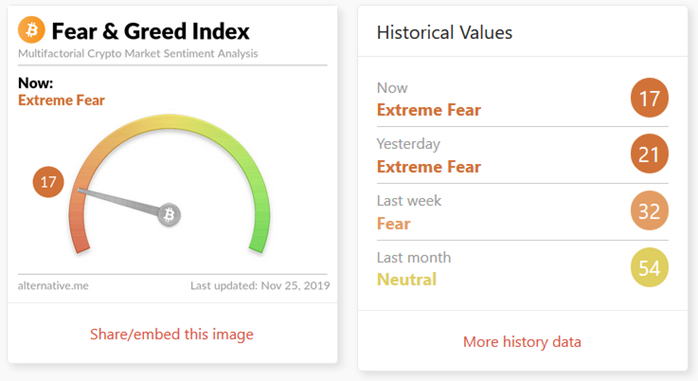 Overall, the price of Bitcoin has again responded positively following a selloff. There are underlying signs of a case for a bullish reversal going into the year. But for the bullish scenario to proceed, Bitcoin would need to regain the 100-week moving average at around $7.4K in the near future.

Failure to do so will mean that Bitcoin potentially needs to do more testing of the bulls in the $6K range. A lack of response here would potentially lead to a much bigger decline and test of the 200-week moving average.